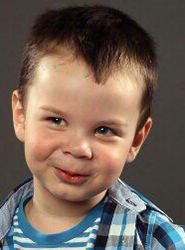 Demid Zinnatshin came back home. The boy underwent the basic course of treatment. He had several emergency surgeries and overcame all difficulties as a real “Ural bogatyr”.

Recently, the family of Demid Zinnatshin visited us. They shared the news that the main treatment course was completed and told us about unexpected challenges they faced at the end of autumn.

“In the mid-November, when just few days were left to fly home, the treatment was completed and we had only final MRT, suddenly, my son felt himself bad. He had a headache”, Demid’s father told us.

Then everything was like a nightmare: hydrocephalus, operation of cleaning and partial replacement of shunt. Improvement and deterioration again. Life support and operation on replacement the whole shunting system. Stabilization, and the child felt himself worse again. Infection, right brain oedema and several weeks in the hospital almost immovable.

“Dyoma wasn’t allowed even to sit on the bed, because he had an open-ditch drainage system. We could sit up only under the supervision of our physician”, the family remembered. “From mid-November till mid-December, the whole month became a nightmare for us”.

In the clinic, they call Demid “Ural warrior”, he showed the fight to the disease. He defeated the oedema and began to recover his motor skills, and after he left the hospital he succeeded: during long flight, time spent in the airports, he got over about seven kilometres, relying on pedometer.

The boy vaguely remembers the hard onset of winter: he has more scars. New health problems appeared, Demid works at each of them “till final tears”.

All the time, the boy has to rehabilitate, train with instructors and undergo medical rehabilitation to recover the movements. He needs several specialists to develop the speech: many sounds have to be “set” again because of the paresis that the boy had.

It seems that all these new problems and tasks just make the boy stronger as the warrior. And above all, oncologists’ verdict empowers him for each new step. The boy’s brain is clean, according to the results of analyses that the family has. Control examinations lie ahead, and we will tell you the results.

Thanks for being with Demid during this path. We will be waiting with you for news!